Campsite Les Deux Vallées will be open again from June 8th.
Everyone is of course welcome!

Press alert: foreign tourists will be welcome in French campsites in July and August 2020

The Fédération Nationale de l’Hôtellerie de Plein Air (FNHPA) would like to remind foreign press correspondents in France that foreign tourists will be welcome in France during the summer of 2020, subject to the opening of French borders as well as those of other European countries and to favourable health conditions. Contrary to misinterpretations that have already appeared in some European countries, the Interministerial Committee on Tourism convened by Prime Minister Edouard Philippe on 14 May 2020 was very clear on this point.

Likely reopening of intra-European borders at the end of June

The French Minister of the Interior, Christophe Castaner, announced on 7 May that restrictions on France’s borders with countries in the European area (European Union, Schengen area, United Kingdom) will be “extended until at least 15 June“. In addition, the fourteen measures “for any French or foreign person entering France,” permitted by the bill extending the state of health emergency, “at this stage, given the evolution of the epidemic in Europe and in view of the alignment of health measures between European countries,” will not be applied within the European area, “except overseas and, if we decide to do so, in Corsica.”

Foreign tourists welcome in France if health conditions allow it

The press kit of the Interministerial Committee for Tourism of 14 May but states (extract from page 10): “France welcomes the proposals made by the European Commission in its communications of 13 May on tourism and transport, to restore mobility and allow a gradual reopening of tourist destinations in Europe. France will play its full role in facilitating the harmonization of health measures for the reception of tourists and professionals, particularly in the hotel, café and restaurant sector and transport, as well as close cooperation in the evaluation of epidemiological situations. These measures, proposed by the committee, will play a key role in reopening certain regions of Europe to tourism as soon as the health situation permits. France will ensure that the health protocols validated today feed into this necessary European harmonisation effort. France reiterates its commitment to ensuring that no discrimination on the basis of nationality can take place when European tourist destinations are reopened. »

Under these conditions, French campsites are looking forward to welcoming their European clients, sanitary conditions permitting.

French people may take to the streets again on May 11th.

France will gradually and cautiously lift quarantine as long as the number of cases of infection in France remains limited. That’s what Prime Minister Philippe said in parliament. The intention is that from May 11th the shops will open again and the French will be allowed back on the streets, without the document that is still required for that purpose. Also, the schools will gradually start up again, and public transport will start running again.

But life will not yet be as it was before the corona crisis, said Prime Minister Edouard Philippe in parliament. In shops, only a limited number of customers are allowed in and out at the same time. Travelling is allowed, but preferably only in the surrounding area. All major museums will remain closed for the time being. The hospitality industry will also remain closed until at least the end of May. Football competitions will only start up again next season.

The Prime Minister explained in parliament that the relaxation of the quarantine will apply for three weeks, until 2 June. Shortly before that date, it will be decided what France will look like after that. The lifting of the quarantine measures may also differ from department to department, Philippe said. Everywhere in the country the number of infections is being investigated, how much hospital capacity there is and whether there are enough tests. “On the basis of those criteria each department will get a ‘green’ or a ‘red’ stamp,” said the Prime Minister. Green is good and means that the rules can be relaxed.

The French government is going to make sure that everyone who wants to can wear a mouth cap from 11 May. France will also be testing 700,000 people a week for corona from that day on. In case of symptoms, patients will be asked to isolate themselves. For the time being, the government will not use an app on people’s phones to combat the virus. The effectiveness has not yet been established and privacy is not guaranteed, said Prime Minister Philippe. 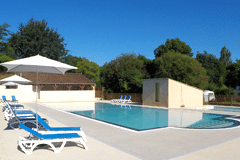